This version fix the CoreGraphics warning when using PNG and force-decode(by default without .avoidDecodedImage)

This library provides an async image downloader with cache support. For convenience, we added categories for UI elements like UIImageView, UIButton, MKAnnotationView.

In order to keep SDWebImage focused and limited to the core features, but also allow extensibility and custom behaviors, during the 5.0 refactoring we focused on modularizing the library. As such, we have moved/built new modules to SDWebImage org.

SwiftUI is an innovative UI framework written in Swift to build user interfaces across all Apple platforms.

We support SwiftUI by building a brand new framework called SDWebImageSwiftUI, which is built on top of SDWebImage core functions (caching, loading and animation).

You can use those directly, or create similar components of your own, by using the customizable architecture of SDWebImage.

Don't have UIView (like WatchKit or CALayer)? you can still use SDAnimatedPlayer the player engine for advanced playback and rendering.

FLAnimatedImage integration has its own dedicated repo

In order to clean up things and make our core project do less things, we decided that the FLAnimatedImage integration does not belong here. From 5.0, this will still be available, but under a dedicated repo SDWebImageFLPlugin.

There are four ways to use SDWebImage in your project:

CocoaPods is a dependency manager for Objective-C, which automates and simplifies the process of using 3rd-party libraries in your projects. See the Get Started section for more details.

Swift project previously had to use use_frameworks! to make all Pods into dynamic framework to let CocoaPods work.

However, starting with CocoaPods 1.5.0+ (with Xcode 9+), which supports to build both Objective-C && Swift code into static framework. You can use modular headers to use SDWebImage as static framework, without the need of use_frameworks!:

If not, you still need to add use_frameworks! to use SDWebImage as dynamic framework:

There are 2 subspecs available now: Core and MapKit (this means you can install only some of the SDWebImage modules. By default, you get just Core, so if you need MapKit, you need to specify it).

Carthage is a lightweight dependency manager for Swift and Objective-C. It leverages CocoaTouch modules and is less invasive than CocoaPods.

To install with carthage, follow the instruction on Carthage

Carthage users can point to this repository and use whichever generated framework they'd like: SDWebImage, SDWebImageMapKit or both.

Make the following entry in your Cartfile: github "SDWebImage/SDWebImage" Then run carthage update If this is your first time using Carthage in the project, you'll need to go through some additional steps as explained over at Carthage.

NOTE: At this time, Carthage does not provide a way to build only specific repository subcomponents (or equivalent of CocoaPods's subspecs). All components and their dependencies will be built with the above command. However, you don't need to copy frameworks you aren't using into your project. For instance, if you aren't using SDWebImageMapKit, feel free to delete that framework from the Carthage Build directory after carthage update completes.

Swift Package Manager (SwiftPM) is a tool for managing the distribution of Swift code as well as C-family dependency. From Xcode 11, SwiftPM got natively integrated with Xcode.

SDWebImage support SwiftPM from version 5.1.0. To use SwiftPM, you should use Xcode 11 to open your project. Click File -> Swift Packages -> Add Package Dependency, enter SDWebImage repo's URL. Or you can login Xcode with your GitHub account and just type SDWebImage to search.

After select the package, you can choose the dependency type (tagged version, branch or commit). Then Xcode will setup all the stuff for you.

If you're a framework author and use SDWebImage as a dependency, update your Package.swift file:

Import headers in your source files

In the source files where you need to use the library, import the umbrella header file:

It's also recommend to use the module import syntax, available for CocoaPods(enable modular_headers)/Carthage/SwiftPM.

At this point your workspace should build without error. If you are having problem, post to the Issue and the community can help you solve it.

As required by the App privacy details on the App Store, here's SDWebImage's list of Data Collection Practices.

Thank you to all the people who have already contributed to SDWebImage.

All source code is licensed under the MIT License.

To learn about SDWebImage's architecture design for contribution, read The Core of SDWebImage v5.6 Architecture. Thanks @looseyi for the post and translation. 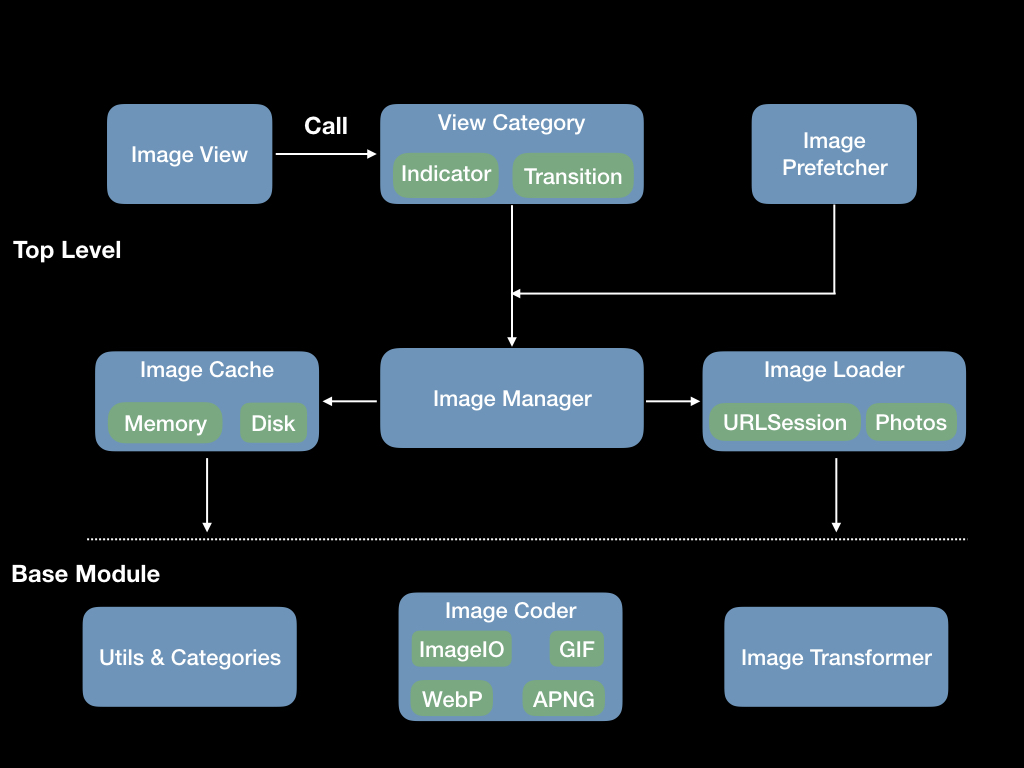 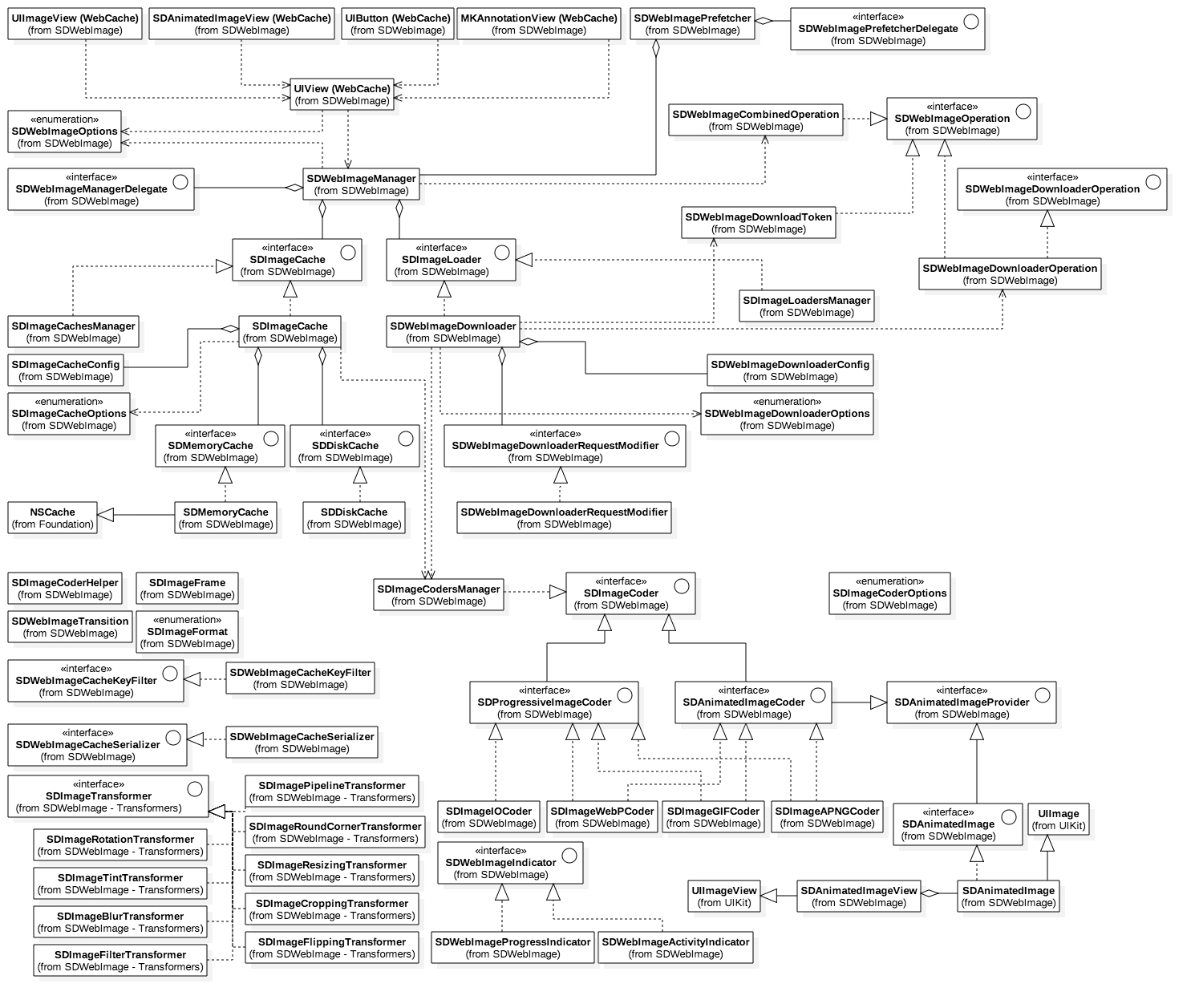