Created as a means of testing SourceKit but useful more generally as a mean for browsing source code, siteify is a Swift program that creates a hyperlinked HTML reference of a project that can be built with the Swift Package Manager and be navigated in a Web Browser. Links over symbol references take you to their definition and clicking on the link on a definition will list links for the places the symbol is referenced.

For example, the source of this project is available to browse here. 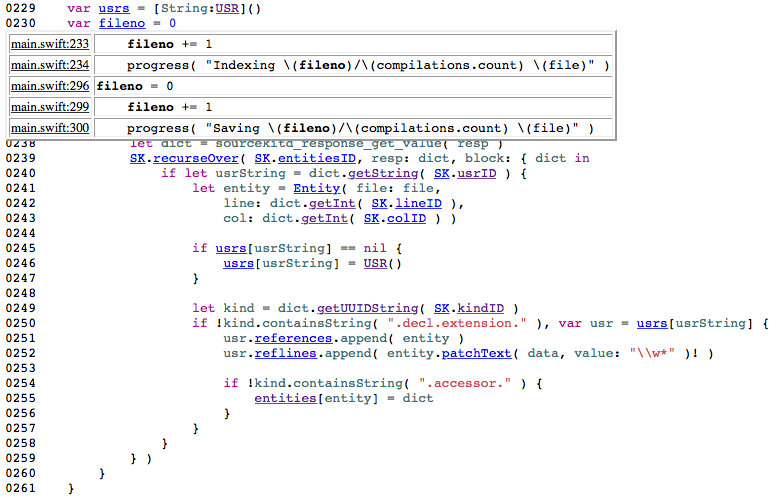 To use, download, and build this project using Xcode or Swift Package Manager. After the Xcode build completes, the binary is installed as ~/bin/siteify. Using SPM, use swift build and copy .build/debug/siteify to ~/bin.

cd into the root the SPM project you wish to document and run swift build in order to update its index then type ~/bin/siteify. You'll need to download a recent development toolchain from swift.org to get the required sourcekit-lsp executable. siteify can take a command line argument which is the SPM repo to process but always places the generated html in the directory html created in the current working directory and opens the file html/index.html.

Having started as Xcode project, eventually I wanted to start using SPM dependencies so the project contains a script pre-action.sh which allows you to include SPM dependencies as frameworks during the transition.

Siteify generates html files based on templates built into the app from the source Resources.swift. Certain information about a file is patched in at the last minute using tags such as \_\_ROOT\_\_, \_\_DATE\_\_, \_\_REPO\_\_ and, for individual source files , \_\_CRDATE\_\_, , \_\_MDATE\_\_ along with the system \_\_IMG\_\_ for that type of file. These templates are compiled into the application but can be overridden by placing your own HTML/CSS/JS templates in ~/Library/Siteify for the styling you prefer.

Permission is hereby granted, free of charge, to any person obtaining a copy of this software and associated documentation files (the "Software"), to deal in the Software without restriction, including without limitation the rights to use, copy, modify, merge, publish, distribute, sublicense, and/or sell copies of the Software, and to permit persons to whom the Software is furnished to do so, subject to the following conditions:

The above copyright notice and this permission notice shall be included in all copies or substantial portions of the Software.

This source includes a header file "sourcekit.h" from Apple's Swift Open Source distribution under Apache License v2.0 and a very old version of canviz which allows you to render graphviz "dot" files of class inter-relationships if you have /usr/local/bin/dot installed and you view the generated files through a web server.