Update: This former Xcode plugin has been re-organised into a Swift Package for use in other apps. Use the Xprobe product in client applications and the XprobeUI product at the server side.

The XprobePlugin gives you a view of the objects inside your application either in detail down to the level of ivars or globally as a graph of the principal objects and how they are connected. This display can be animated in real time, highlighting in red objects as they are messaged and the paths down which messages are flowing. This is done automatically by performing a "sweep" to find all objects referred to by a set of seeds, the objects they refer to, the objects those refer to and so forth to build up the list of live objects which can be displayed in Xcode:

In the simulator, the memory sweeper is loaded from a bundle inside the plugin using lldb requiring no changes to the app's project source. To use the plugin, build this project and restart Xcode. Once your application is running, use menu item "Product/Xprobe/Load" to load the initial view of the memory sweep of your app. If you are a plugin developer you use "Product/Xprobe/Xcode" to inspect the objects of the Xcode application itself.

You can then filter the objects listed into the app or their methods using a pattern. If there are no objects matching the pattern and it is a class name it will be displayed. Patterns prefixed with '+' or '-' will search all classes linked into the application for methods matching the pattern. A raw pointer prefixed with "0x" can be entered to inspect an object passed as an argument to a trace. You can also enter an object "path" starting "seed." from the paths logged as you browse your application so you can find your way back to objects easily.

If you have the injectionforxcode plugin installed Xprobe will allow you to evaluate Objective-C or Swift against a selected instance for which you have the source to log or modify any aspect of the object's state at run time.

Xprobe.mm can now snapshot your app to a standalone html file in the event of an error. This performs a sweep and can document the state of your app at the time the error occured for later analysis. An example snapshot file for a ReactNative example project "TickTackToe" can be viewed here.

To take a snapshot, include Xprobe.mm in your app and use the following call:

If you run into difficulties you can alter the pattern of classe names not to capture with an additional excluding:(NSString *)pattern argument. The default value for this is:

The remaining features are most easily rolled off as a series of bullet points: 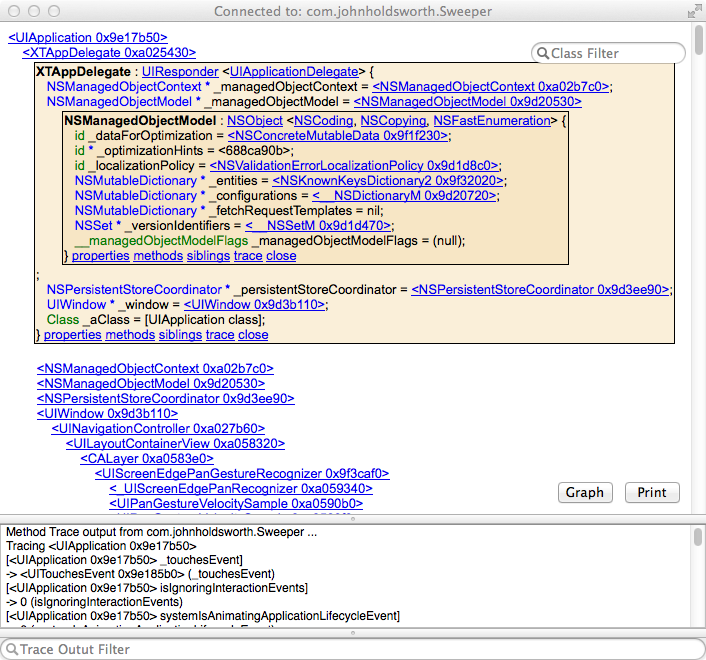 Click on an object's link to view it's ivar contents.

Click the link again to close the detail view.

Click on the superclass link to view it's ivars

The class' properties, methods and any protocols can be viewed.

The method lists can be searched (also finding superclass methods)

Use the "trace" link to start logging calls to methods on that instance.

To see all methods traced for an object, click trace against each class.

Trace output can be filtered using a regular expression

The subviews link will recursively display the tree of subviews under a view.

The "render" link will capture an image when the object is a view.

The siblings link will display all objects found that share the object's class.

Refresh the object list by typing enter in the Search Field to force a new sweep.

Pressing the Graph button will open the summary view of the most important objects and any "kit" objects directly linked to them taken from the last sweep.

The object is represented as a square if is it a view (responds to "subviews".)

Graph display requires an installation of "Graphviz/dot" on your computer.

Click on an object to view it's current contents as discussed above.

Differing filtering of which objects to include can be applied.

"Animate Messages" puts a trace on objects having them display "red" when messaged.

Graphs can be exported to Graphviz or .png format for printing.

Alas, Swift support is limited at the moment as ivar_getTypeEncoding() returns NULL for ivar fields preventing them taking part in the "sweep".

Use on a device.

Xprobe works by loading a bundle in the simulator which connects to Xcode when it is loaded. An application makes its list of seed nodes known to Xprobe by implementing the following category:

Once an app is initialised call [Xprobe connectTo:"your.ip.address" retainObjects:YES] to connect to the TCP server running inside Xcode. The retainObjects: argument specifies whether to retain objects found in the sweep. This will make Xprobe more reliable but it will affect object life-cycles in your app. After this, call [Xprobe search:@""] to perform the initial sweep starting at these objects looking for root objects. Each time "search:" is called or the object class filter is changed the sweep is performed anew. The application will need to be built with Xprobe and Xtrace.{h,mm}.

In this day and age of nice clean "strong" and "weak" pointers the sweep seems very reliable if objects are somehow visible to the seeds. Some legacy classes are not well behaved and use "assign" properties which can contain pointers to deallocated objects. To avoid sweeping the ivars of these classes Xprobe has an exclusion filter which can be overridden (with a warning) in a category:

These exclusions allow Xprobe to work cleanly inside Xcode itself which comes in handy if you're a plugin dev. For any suggestions or feedback you can contact the author on xprobe at johnholdsworth.com. Major releases will be announced on twitter @Injection4Xcode.

With Swift 2.3+, Xprobe is no longer able to scan ivars that do not have properties i.e. classes that do not inherit from NSObject.

Copyright (c) 2014-5 John Holdsworth. Licensed for download, modification and any use during development of Objectice-C applications, re-distribution may only be through a public repo github however including this copyright notice. For binary redistribution with your app get in touch!

This release includes a very slightly modified version of the excellent canviz library to render "dot" files in an HTML canvas which is subject to an MIT license. The changes are to pass through the ID of the node to the node label tag (line 212), to reverse the rendering of nodes and the lines linking them (line 406) and to store edge paths so they can be colored (line 66 and 303) in "canviz-0.1/canviz.js".

It now also includes CodeMirror JavaScript editor for the code to be evaluated using injection under an MIT license.