Star
Warns you about leaked Views and ViewControllers as soon as they occur!
Janneman84/LeakedViewControllerDetector

Made tweaks so it passes all the build tests from Swift 5.3/Xcode 12.4 and up, as listed here:
https://swiftpackageindex.com/Janneman84/LeakedViewControllerDetector/builds

Find leaked Views and ViewControllers without even looking for them!

LeakedViewControllerDetector helps you find leaked Views and ViewControllers in your iOS or tvOS UIKit app. It's easy to accidentally create a retain cycle causing a ViewController (or View) to stay in memory. These memory leaks often cause weird issues in your app. This package warns you as soon as this occurs, helping you to track down the cause of the memory leak and improve the stability of your app. It's a great help for every UIKit app!

An alert pops up when a leak is detected: 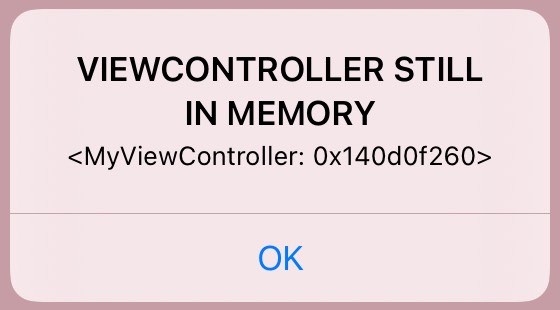 The alert updates if the leak resolves itself: 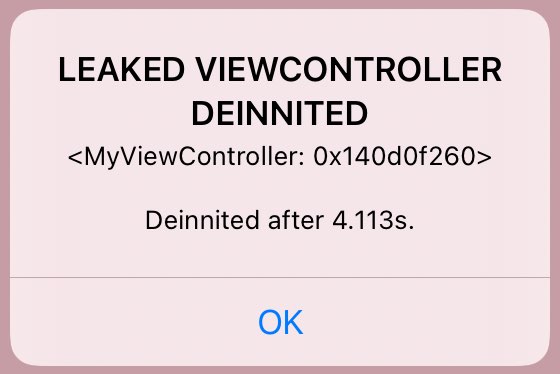 First install this package through SPM using the Github url https://github.com/Janneman84/LeakedViewControllerDetector. I suggest to use the main branch. Make sure the library is linked to the target:

Or you can just copy/paste the LeakedViewControllerDetector.swift file to your project, which is not recommended since you won't receive updates this way.

Now if you used SPM add import to AppDelegate:

Then add the following code to application(_:didFinishLaunchingWithOptions:) in the AppDelegate class:

As you can see the example uses different implementations for debug and release builds by checking the DEBUG flag. More details and examples are further below.

Most leak detection works without changing your code. However you do need to manually replace View's removeFromSuperview() with removeFromSuperviewDetectLeaks() every time you want to remove a view and make sure it gets deinnited:

Of course only use this if the View is supposed to deinit after it left the view tree, else you might end up with false warnings.

The rest of your code needs to comply to a few trivial things. First, make sure that you always call super if you override viewDidAppear() and/or viewDidDisappear() in your ViewControllers. This is common practice so you probably already did this anyway, but it is essential that you do now.

That's it! The leak detector is now fully operational. If your app is functioning correctly you won't notice anything. Further below is a list of common causes of memory leaks. You can use these to trigger a warning.

As you can see in the quickstart it is recommended to treat debug and release builds differently. If you're debugging it's nice to get a popup dialog warning you of an issue, but you don't want your users to see this, so you log instead. Let's walk through the arguments of the callback.

debugDelay and releaseDelay is the time in seconds the ViewController gets after it closes to deinit itself before it triggers a warning (for debug and release build respectively). If you get false positives you may want to increase this number. I recommend a tighter value like 0.1s for debug builds and 1.0s for release builds (which are the default values).

The callback supplies the following:

The callback expects an optional Bool to be returned:

If for some reason you want to ignore warnings of certain Views or ViewControllers, make sure you return nil:

The package already ignores a few ViewControllers by itself, mainly those related to the keyboard. They are listed in the lvcdIgnoredViewControllers property in the source code. If you believe it should ignore more than these don't hesitate to let me know in the Issues section.

How does this package detect leaked ViewControllers?

In essence all it really does is this:

Of course there is a bit more to it than that to catch all the edge scenarios. Leaked Views are detected in a similar fashion. Feel free to look at the source code, it's pretty small. Unless you're doing fancy things this approach is surprisingly effective.

1. Referencing self in callbacks

Referencing self inside a callback is often the cause of a memory leak. This code will keep a ViewController, View, or any other object alive for 10 seconds:

These issues are easily fixed by using [weak self], as you probably know:

Don't forget to also use [weak self] when observing for notifications like this, or else the ViewController will stay in memory forever:

Or instead you can observe using a selector like this, which cannot cause a memory leak:

Make sure to always declare delegates as weak vars or else you will get a memory leak:

Instead it's best to just always use this:

This trick makes sure the delegate is always set to the parent, whatever it is.

This is a sneaky one. If your ViewController is inside a NavigationController and you set its presentationController delegate right after it closed it will keep itself and its children in memory forever:

Sometimes you want to reference an alert inside one of its actions' callback. In that case make sure you use unowned or weak or the alert will linger in memory forever. You can use unowned if you're certain it won't be nil (which is the case here), it's basically the same as explicitly unwrapping weak:

There are some cases where hitting a breakpoint and/or using the view hierarchy debugger in an app may lead to (what appears to be) memory leaks and other weird issues. I don't have any reproducable steps yet but if I do I will list them here. Please let me know in the Issues section if you know more about this.

Using a SplitViewController on an iPhone does result in some perculiar behavior. If you push or present a detail VC from the master and then close it the VC will not be removed but will stay active in memory. If you push/present a new detail VC thén the previous VC will actually be removed. This package takes this behavior into account. Just keep in mind that if you close a detail VC it will very much stay alive until you open a new one. It's not strictly a memory leak but it is a common cause of related issues if you're not aware of this behavior. Also fun is that on iPhone the initial detail VC never deinits, so yeah...

Do you know other causes of leaks that aren't listed here? Please let me know in the Issues section so I can add them.

How do I know what causes my View or ViewController to leak?

This package only knows if a leak occurs but it doesn't know why: that's up to you to figure out. The list above should help you find the culprit. If you also get a deinit warning this probably means it has to do with a network call or some animation. In some cases you may get warnings of both ViewControllers and Views, concentrate on fixing the ViewController first then any View warnings will usually go away too. A good strategy is to keep undressing your View or ViewController (mainly ViewDidLoad()) until the leak stops occuring. Or completely undress it first then put everything back piece by piece, or something in the middle (binary search).

You can add deinit{} to any object to monitor if it deinits. A typical usage is deinit{print("deinit \(self)")}. Watch your console and see if the print shows up when the object is supposed to deinit. If you get a memory leak warning you may want to add this to the class to confirm that it actually leaked and/or a fix worked.

Why not just use Instruments?

You can use Xcode's instruments to find memory leaks. However these can be complicated to use and only works if you are specifically searching for leaks. The advantage of this package is that it always works and you don't have to keep it in mind. Also it works when your users are using it so you know when a memory leak occurs in the wild. Note that this package only detects leaked ViewControllers and its Views and not other objects like the instruments can. ViewControllers tend to be the culprit of most leaks though so it's a good start.

Performance shouldn't be an issue for most apps because the code is well optimized. If you're concerned you may choose to just check for leaks in debug builds. If you're experiencing performance issues or any other issues make sure to let me know in the Issues section.

Why wasn't this package created 10 years ago?

I wish it was, would have saved me lots of head aches... Now UIKit is gradually being replaced with SwiftUI making this package obsolete :(. Technically it doesn't do anything that wasn't possible 10 years ago, so it's a bit late to the party I know. Better late than never!

This package may produce false or positives or false negatives in certain situations. It is not guaranteed to catch every memory leak and it only detects leaked ViewControllers and its Views, not other object. Please go to the Issues section if you're experiencing trouble. This package makes use of method swizzling of the following methods: UIViewControllers viewDidAppear(), viewDidDisappear(), removeFromParent() and UISplitViewControllers showDetailViewController().

Has this package helped you find any leaks? Please leave a message in the testimonials thread in the Issues section!